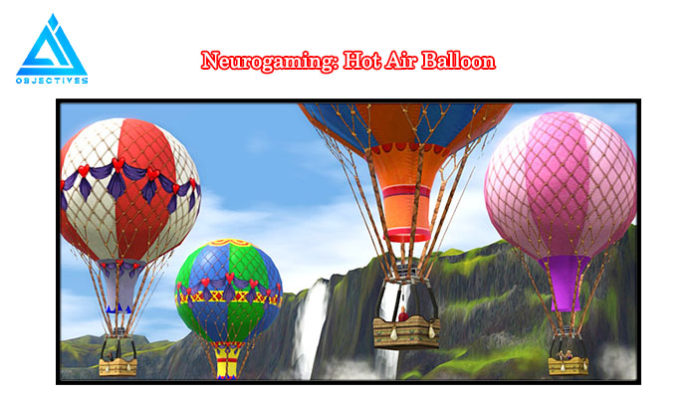 To make gaming more immersive and exciting, a new method of gaming has emerged recently which is termed as neurogaming. It is a new concept of gaming that is bound to change the gaming world. Neurogaming is capable of overshadowing the traditional console. It can have multiple applications in the medical field for the treatment of multiple brain disorders like Attention-Deficit/Hyperactivity Disorder (ADHD), Post-traumatic stress disorder (PTSD). To develop such games Brain Computer Interface (BCI) is the most common method which provides a communication pathway between brain and computer by using a technique known as electroencephalography or normally termed as EEG. It uses a BCI device to detect the brain signals and translates these signals into particular actions that can be interpreted by various application and games. One example of such game related to BCI and EEG is Fairy monster Hunter game.

Hot Air Balloon is primarily based on the concept of neurogaming (Neurogaming: Hot Air Balloon!!!). It works on the values of meditation and attention level. Hot Air Balloon will help the player to improve their attention span. The headset that is used for the working of Hot Air Balloon is called Neurosky Mindwave. Neurosky is a wireless EEG device which captures brainwaves in real-time. Neurosky Attention Meter algorithm indicates the intensity of mental “focus” or “attention.” The value ranges from 0 to 100. The attention level increases when a user focuses on a single thought or an external object, and decreases when distracted. The Meditation Meter algorithm indicates the level of mental “calmness” or “relaxation.” The value ranges from 0 to 100, and increases when users relax the mind and decreases when they are uneasy or stressed.

What is Hot Air Balloon

The game consists of 2D balloon sprites which are animated to explode like a bomb. More the attention level, the larger the balloon gets, and ultimately explodes. The balloon string is designed to show the fire particles when the balloon is about to explode. On explosion, a fire explosion sprite is displayed.

The Neurosky headset used to run this game is called Mindwave. The game is created using Unity 3D and is a Mindwave controlled blast game. To start the game, click connect to Mindwave on the upper left corner of the UI. The game works on following parameters:

The game functioning is directly related to the attention level. After a certain meditation level is reached, the game play is directed by the values of attention.

The game has a front page where you can start the game selecting the connecting to Mindwave button. The game doesn’t start unless you connect to your Mindwave device.

Once the Neurosky Mindwave is connected, you can start playing the game. The balloon enlarges the more you focus and just before exploding, the balloon string sets itself on fire.

Hot Air balloon is different from traditional games. You can evaluate your focus and attention level by playing this game. By wearing a simple headset, you will be able to control a game character with your brain.

See more about detail in analysis of computational informatics and AI

Usage of Artificial Technology in Agriculture

what is automated reasoning in artificial intelligence?