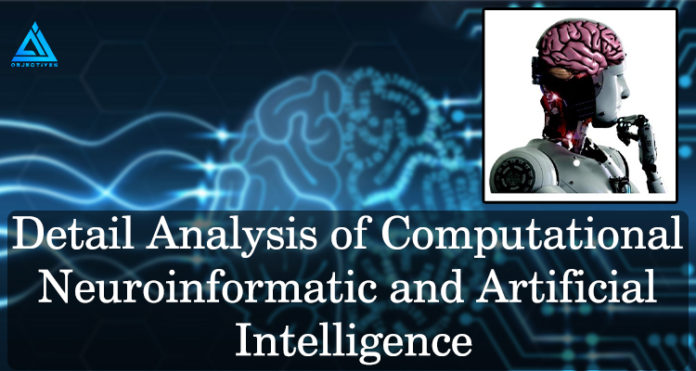 What is Computational Neuroinformatics?

Computational Neuroinformatics is an interdisciplinary field that refers to the development of computational models and analytical tools by applying knowledge of neuroscience, computer science and applied mathematics. These tools and models allow to understand complex working patterns of human brain and to work towards the treatment of various neurological ailments. However, the development of these sophisticated models requires large volume of brain data as human brain consist of approximately 90 billion neurons along with equal number of non-neural cells.

How it related to AI?

The working of human brain is the main inspiration of developing models that can be intelligent enough to recreate intelligence using various deep neural networks. Therefore, Artificial Intelligence (AI) has an ability to derive patterns based on large and complex datasets such as neuroimaging. These models can developed using different techniques i.e. Deep learning and various Machine-Learning algorithms where model can trained on given data in order to predict outcomes based on previous data.

The recorded neuroimaging data capture information from millions of neurons. In order to get useful information from the recorded data, computer need to establish an underlying structure of data using AI. To make sense of such a small sample, the computer had to find the underlying structure of the data. AI has shown remarkable results in identifying patterns. For instance, artificial neural networks that consist of network of neurons can now identify various objects and efficiently spot pedestrians that used in self-driving cars.

What is computational perspective of AI?

The human brain functionality can derived by observing human behavior while performing certain tasks such as limb movements, speech, memory and thinking process. However, it is hard to define and detect certain brain areas and task specific neural activity.

In addition, these brain patterns can vary from subject to subject due to the complexity and structural variability in human brain. Thus, it is computationally very expensive to develop AI based models based on Microscopic brain dynamics for anatomically different brain parts. In order to reduce complexity, the computational models can be simplified by measuring brain patterns on macro scale.

In Computational Neuroinformatics, a good component of artificial intelligence is mainly concerned with developing low-level cognitive models such as signal analysis for various body functions, developing simple neural association and control models. Technique for developing these models include both supervised and unsupervised learning by using adaptive systems. These models not only include fuzzy, neural, and evolutionary methods but also include statistical and probabilistic approaches, such as kernel methods or Bayesian networks.

Current research in neuroinformatics include the development of research tools for evolving the pathways. Also models that involved in the detection of neurodegenerative diseases such as Seizure detection, brain tumor identification, and epilepsy detection. These abnormalities can detected using fMRI, EEG, MEG, PET techniques. Despite of significant research in neuroinformatics and AI. There still a lot of progress required for developing efficient AI models in this field.

Benchmark dataset is the main requirement and need of developing AI models for neuroinformatics. The lacking of benchmark dataset can result in the inappropriate trained biases in ANNs. The term Benchmark dataset refers to the collection of desired data which has teased and verified to be precise.

Just like humans, the neural network based AI models consist of non-linear and complex variables that are built on the previous knowledge or certain dataset. Therefore, development of adaptive learning-based models are of current research so that they predict non-linear behavior.

The main aim of developing these computational models is to understand and interpret brain data for providing diagnosis and assistance in solving real life problems such as early detection of Alzheimer’s disease (AD). Neuroimaging techniques is most widely used for the early detection of Alzheimer disease (AD). Data is mostly acquired using magnetic resonance imaging (MRI) and positron emission tomography (PET). These techniques have shown promising results in order to detect any abnormalities in brain data. AI based techniques have been implemented to detect individuals who might have chances of developing AD and no symptoms have been appeared so far. Deep learning based AI frameworks have now enabled to provide early diagnosis of the patients. In conclusion, studies have shown that the use AI on imaging data for the early diagnosis and detection of Alzheimer disease is successful even in the earlier stages of disease when clinical symptoms are not fully expressed and the regional brain damage may be limited.

Other real-life examples include the development of Brain Computer Interface (BCI) which has vast applications in entertainment, rehabilitation, and providing assistance to the paralyzed people. For the development of BCI, data is acquired from user using EEG techniques.

In which electrodes are used to capture electrical signals produced as a result of certain activities such as imagination of limb movements. Scientists and researchers are striving to develop such systems that are convenient for the user and user friendly at the same time. Several systems are available that allow individual to control real time application by using their brain signals. These applications include wheelchair control, humanoid robots, prosthetic control, exoskeleton and neurogaming etc.

What are Autonomous Vehicles? Why we need them?

The Difference Between Data Mining vs Machine learning