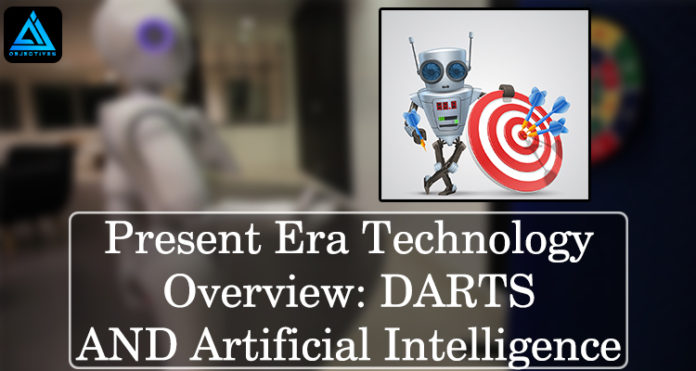 What is Artificial Intelligence and DART?

Today in our technology Artificial intelligence and Dart plays an important role. Artificial intelligence or AI is composed of two words, where Artificial defines “Man-Made” and Intelligence defines “thinking power”. Hence, we can easily define AI as: “Artificial Intelligence or AI is a branch of Computer science and engineering by which we can create smart machines which can perform, work, behave, make decision, think and learn like humans.” We can solve our real-world problems in the field 0f science, mathematics, philosophy, psychology, linguistic and simplify and solve complex problems, such as health issues, traffic issues, marketing issues and etc.

DART is stands for Dynamic Analysis and Re planning Tool. It is an AI system used by US military to automate and schedule equipment or staff transportation and address certain logistic issues. DART has come up with logistical solutions that have surprised many other military planners. DART uses agents to support U.S. to support decision support system. It incorporates a collection of smart data processing agents and database management systems to allow planners to quickly assess logistical feasibility plans. The Dart and Artificial Intelligence is the widely used technology now a days

Artificial intelligence or AI is one of the newest field in science and engineering. The Artificial intelligence or AI goes further still; it attempts not just to understand but also to build intelligence entities. AI currently encompasses a huge variety of sub fields from proving mathematical theorems, playing chess, driving a car and diagnosing diseases. AI is relevant to any intellectual task. It is truly a universal field. By having AI knowledge, we can create our personal virtual assistant, such as Siri, Google Assistant and Cortana and in an environment where survival of humans can be at risk then with the help of Artificial Intelligence we can build Robot.

Artificial intelligence can be categorize based on the functionality into following types:

It’s a reactive machine that reacts depending on the present moment, it does not store memories or have a past experience. This type of AI can be used in gaming as it has the ability to recognize which move would be the best. And the samples of this type are Deep Blue, the IMB’s Chess-playing supercomputer and Google’s Alpha Go.

Like the name suggests, this memory is a short-term memory. It saves specific objects of the past from its memory that leads them to react according to.  Samples of this type are Self-driving, Traffic lights and Chat Robots that inside of each and every one of them is a programed-memory, it stores past experiences and hence evaluate future actions.

The theory of mind AI is more intelligence and advanced type of Artificial intelligence. As it reacts according to understating people emotions and thoughts and it can adjust with people around, build social interaction, predict how people want to be treated. A good example of this type can be Sofia (ROBOT).

Self-aware would be considered the most advanced form of Artificial Intelligence which involved machines that have human-level consciousness that can recognize, replicate human-like actions and also able to think for itself, understand its feeling and have desire.

AI is a broader umbrella under which machine learning and deep learning come. Hence, we can say that all three of them are just the subset of each other. As we have discussed before about AI. Now let us take a look to Machine learning.

Dynamic Replanning in Uncertain Environments for a Sewer Inspection Robot.

The MAKRO sewer inspection robot is a multi-segment autonomous robot with a worm-like shape which is driven by wheel. The robot has to work in sewer system autonomously.His first tasks will be to take water samples, analyze them on board, and measure manholes and pipes positions to detect polluted sewage and improve current sewer system maps. Consisting of six segments connected by five motor-driven active joints, so it become possible to climb up and take turn at same time. It consists of 600mm pipe and 300 mm branch pipe at junction with the same top level.  MAKRO carries on board all the necessary resources like batteries that have capacity to provide power to 21 motors, the sensors and electronics including an industry standard PC/104 + computer system allowing for an up time of about two hours as shown in figure MAKRO 1.1.

Click to know more about The Danger of Artificial Intelligence and Nuclear Technology.