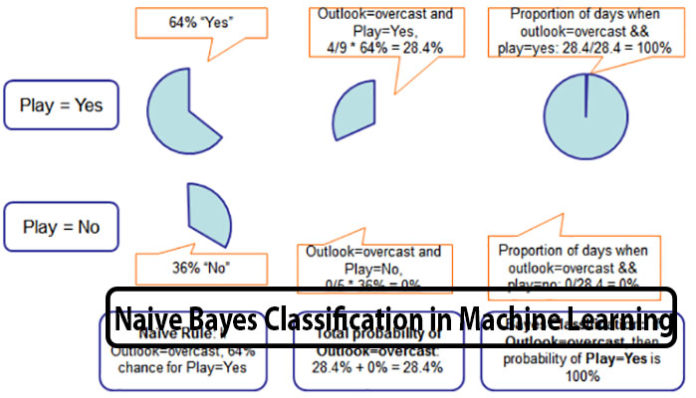 This article Naive Bayes Classifier will help you in understanding one of the simplest and also popular classification algorithms in machine learning, for example,

As this, Following are the main objectives of this article:

A Naive Bayes is a probabilistic based machine learning classification method whose strategy lies behind the principle of Bayes theorem in probability.

Further, To understand how the Bayes theorem works, look at the following equation:

So Here A is the hypothesis and B are called as evidence.

In fact, It is assumed that the predictors or input features used to determine the probability of an outcome are not co-related i.e., their existence in a class is independent of any other feature instances. For instance, if we want to classify fish into two classes as sea bass or salmon, in this case, the feature set may consist of the fish height, color, or feathers.

Also, All of these features contribute independently to the probability that whether the fish is salmon or sea bass. Hence, the so-called name of the algorithm, ‘Naive’ comes from the assumption that the presence of one feature does not affect the other or the predictors/attributes are independent.

It is simple to build and specially used in the classification tasks with larger data sets. Naive Bayes is known to lead pretty sophisticated classifiers, also along with simplicity.

So Let’s have a look on the working of the algorithm using a few illustrative examples below:

Below we have a data set containing weather as a predictor and play as a target class or variable. The weather predictor will suggest the possibility of play.

Here, we need to classify whether the player will play or not, given the condition of the weather. The first column represents whether as a feature and the second column is representing the target variable or class, whereas, the rows represent individual entries. So, If we consider the first row in the dataset, we can conclude that the player will not play as the weather is sunny.

Actually, We have to make the following assumptions here:

1) predictors are independent, i.e., if weather is sunny, it does not necessarily mean that the player will not play, in the case if we have more than one predictors, say humidity, then both the features will give the probability of playing independently; and,

2) all the predictors will equally affect the outcome, i.e., if the weather is sunny and suppose we have one more attribute deciding the possibility of playing, say, humidity, then they both will affect the probability of playing equally.

So According to this example, Bayes theorem can be rewritten as:

Here X can be given as,

x1, x2,… xn represents all the possible features or evidence to decide the possibility of playing, which in this case, is only mapped to weather.

After substituting X and applying the chain rule, we get,

Also, The denominator in the above equation can be removed since its entries will remain static for each observation. Hence we can introduce the following proportionality:

For a multivariate classification problem:

So, we need to find out the class y with the highest probability. So, the above proportionality becomes,

Now, we can find out class based on given predictors using the above formula.

Also To have a better intuition of the theorem let’s do an exercise from the above dataset.

So, Can we predict whether the player will play or not based on the following weather condition?

Suppose we have a set of symptoms for the diagnosis of clinical patients given all the previous patient records. Table 1. shows their observed symptoms and respective diagnosis:

So, Can we predict that the patient with the following symptoms has the flu?

So, In order to answer the above question, we need to do the same steps as we did in the above example, merging all steps, so we will finally have the following prior probabilities for each of the predictors.

So Now we will build a hypothesis based on the evidence of the symptoms in the above question and choose the hypothesis will maximum probability. so We will compute the probability for each outcome of the target attribute flu given the above symptoms as pieces of evidence.

Hence, P(flu=N) will be having maximum probability as 0.0185, given the predictions chills=Y, runny nose=N, headache=Mild, and fever=N. So, we can conclude the class flu with N outcome.

So, This model is used in classification with an assumption of a normal distribution in features or the values are sampled from a Gaussian distribution when there are continuous predictor values.

So, The equation for the probability will be changed to the following equation depending on the way the values are present in the dataset.

The multinomial model is used to count discreetly. So Let’s assume the problem of text classification. so We can take Bernoulli trials here and a one step ahead, instead of finding the occurrence of a word in the document, we will count the frequency of the word in the report, think of it as how many times an outcome number n is being recorded for n number of trials. Mostly, it is used for the classification of documents.

Bernoulli model is similar to the multinomial naive Bayes model in the sense that it founds the occurrence of a word in the text but the difference lies in the representation of predictors. Here, the predictors are represented using Boolean variables. It is useful for the classification tasks with binary feature vectors (i.e., 0 or 1). For instance, in the classification of documents, the occurrence of a word in documents will be represented by 0 or 1, depending on its absence or presence in the document respectively.

Congratulations, until the end of this tutorial you’ve done it!

So far, we take an introductory overview of the Naive Bayes algorithm, its workflow with different examples and also derived its simpler form in terms of argmax, also, we take a look at different models of naive Bayes algorithm and its specifications and purpose. Afterward, we can also discuss some of the pros and cons.

This is the most convenient and straight forward machine learning algorithm. Also, Its worth is still retained in-spite of emerging advances in machine learning. Also Most importantly, it is being used in real-time predictions and has a well-known usage in multi-class predictions.

so Some of the real-life applications of its classifier include text classification, filtering of spam emails, sentiment analysis, and recommendation systems.

Also In the future, we will provide a basic implementation of its classifier in Python using sci-kit-learn and also looking forward to hearing from you like a response in feedback and we will try our best to answer it. So Your suggestions for improvements are always welcome.

You may also know: Role of Artificial Intelligence in Disease prevention