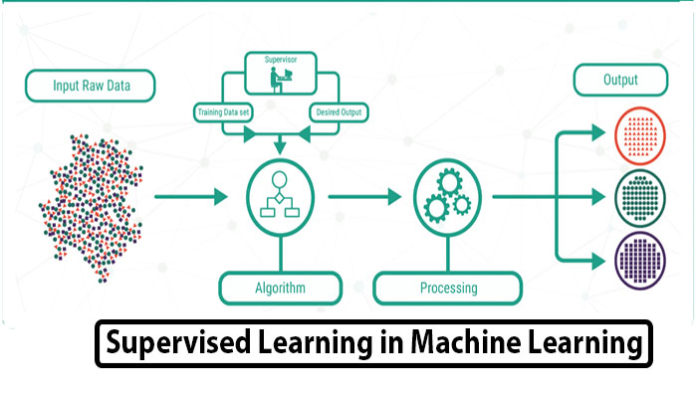 Supervised learning is a technique in which an algorithm gets the training data in the form of desired input (Raw data) and the desired output (Label data). The algorithm learns that what kind of raw data it has due to labels assigned to each raw data. It inferred that in it, an algorithm learns because of a teacher or labeled-example (raw data + label data).

It should kept in mind that it is only possible with labeled data or on data that can be categorized. In the other sense, we can say that we can’t apply a supervised learning algorithm where we have only input data and no corresponding output.

2: Why it is used in Machine Learning?

Machine learning provides an ability for a machine to learn from experiences without explicitly programmed. Generally, machine accesses, processes, and learns from data, Genomics in Machine Learning. So for this purpose, machine learning uses supervised, unsupervised, and semi-supervised learning. If a machine wants to learn from data that is in categorized formate, then it is a preferable approach for a machine to use supervised learning.

In a nutshell, machine learning uses when each training sample consists of input and output. If the machine has only input data that can’t be categorized or labeled for output, then it uses unsupervised learning instead of supervised learning.

The Support Vector Machine (SVM) is an algorithm that separates the data into different classes by a separating hyperplane. The algorithm outputs the hyperplane for given data that categorizes new data. It defines the 1-dimensional line for 2D data and the 2-dimensional space for 3D data

Logistic regression is a machine learning algorithm that used for it. This predictive analysis algorithm assigns the observation to a discrete set of classes. It returns the probability value while using a sigmoid function.

K-nearest neighbor algorithm is a simple and easy to implement algorithm in a supervised machine learning algorithm. This algorithm assumes that similar things are near to each other, and it puts the nearest things in the same category.

In artificial intelligence, similarity learning is a supervised learning algorithm. The main goal of this algorithm is to calculate the similarity of two or more related objects and learn from it. Similarity is measured on different basis like distance, co-existence, features, etc.

it is used in machine learning and deep learning widely. It used in many more places one expect. Probably we have used this in a dozen times without even knowing it. Some of application of supervised learning:

Spam Detector: it is used in email to detect an email that either mail is a spam or not. Our mail server like Hotmail, gmail, outlook does a lot of work in classifying the mail.

Business Enterprises: Today, companies are using it to improve business decisions, increase productivity by analyzing the user’s sentiments and emotions. Medical Field: It is used in the medical field, to check a person has a tumor or not?

Their applications are not only confined to above, but there are many uses of it for example, in marketing and sales, big data analysis, sales applications, data security, mobile applications, websites, etc.

In machine learning, it is used for classifying images, text, speech, etc. Goal of supervised learning is to understand the structure of the data and classify the data. For this purpose, different kinds of algorithms used and imported ones has discussed in brief so far. Each algorithm has limited domain of use but each algorithm gives the ability to machine learn from the past experiences

You may also know Usage of Artificial Intelligence in Tepresence Robot

Understanding of Augmented Reality and its Applications