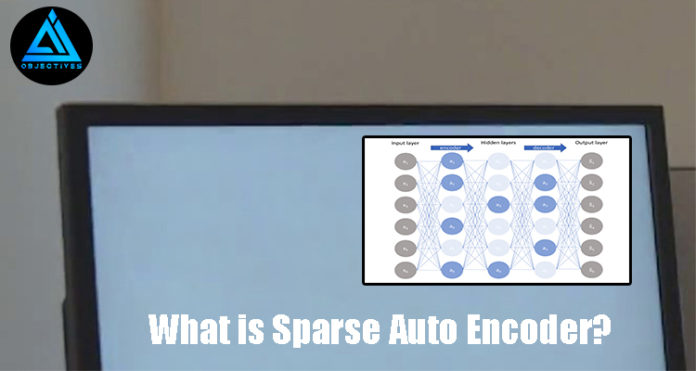 What is Sparse Auto Encoder?

In deep learning development, autoencoders perform the most important role in unsupervised learning models. Although, autoencoders project to compress presentation and reserve important statistics for recreating the input data, they are usually utilized for feature learning or for the reducing the dimensions. A simple structure of auto encoder is shown as below:

A sparse autoencoder is type of artificial neural network autoencoder which operates on the rule of unsupervised machine learning. Autoencoders are basically deep network which can utilized for reducing the dimensions and also to rebuild the model by using backpropagation. A sparse autoencoder mostly involved during the training criterion for sparsity penalty. Most of time we build our own loss function to penalize the hidden layers’ activations so that very few nodes will stimulated for activation when we fed only single illustration to the neural network.

The perception behind the methodology will be explained as if a person states that he is expertise in mathematics, psychology, classical music and computer science, he may be just having quite knowledge in all above subjects.  Though, he only states that he is devoted in mathematics then we might like to expect some valuable perception from him. This goes same for the autoencoders that we do training by activating only few nodes and its performance will assure that it is learning hidden presentation instead of dismissed information of our given data.

Why it uses in Deep Learning?

Sparse autoencoders are mostly utilized for learning the features for some other task like classification. An autoencoder is normalized so that sparse must give response to the inimitable statistical features of the given dataset upon which it is trained rather than it just simply acts like an identity function. According to this, training to accomplish the replicating the task having the sparse penalty may produce the model which learns the most useful features as a result.

There is also another method to constraint the rebuilding of autoencoder to execute the constraint as a loss. We can also add the regularization in implementing the loss function. By doing this our autoencoder will learn the sparse presentation of our data. That is why it is used in Deep learning.

What is the structure of Sparse Auto Encoder?

According to the structural point, the sparse autoencoders basically have single hidden layer in their neural network which is axisymmetric. They encode the given input data by utilizing the hidden layers, approaches to the minimum error and gets the hidden layer having the best feature expression. The main concept for autoencoder originates from the unsupervised simulation of human perception learning which also have some flaws in their functionality.

For example, the autoencoders does not acquire the features by replicating and storing the memory into implied layers. However, it can also rebuild the given input data with having the high precision. The sparse autoencoders gets knowledge of autoencoder and presents the sparse penalty by adding the constraints for learning the features by summarizing the expression of inputted data.

The structure of sparse autoencoder can be visualized in below figure:

We can conclude that sparse autoencoders are able to reconstruct the original data by adding the sparsity to the nodes of hidden layers in deep neural networks due to which features are extracted during the training process.

Approach towards of Robots in BioMEMS