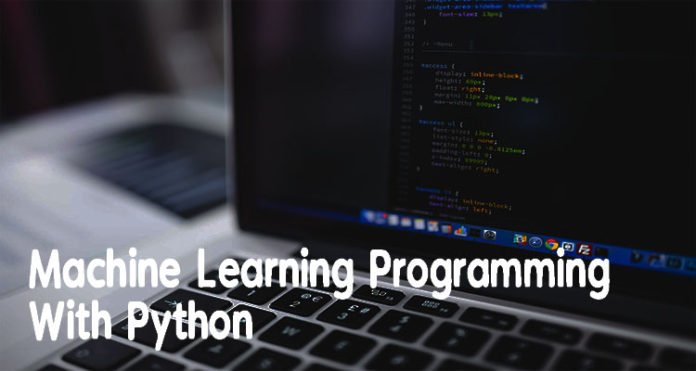 Nowadays python is the most emerging Language in the industry if we look at the chart below we can see the effective inclination in recent years.

The main reason for its popularity is the vast use of it in machine learning and AI. There are many other languages but well known are C, C++, R; python is taking the grounds because of its scalability and its usage on a vast scale and its compatibility on frameworks of Large Scale Machine Learning.

Machine learning has computed complex algorithms that need a language that has computation capability to perform linear algebra and calculus calculations. With built-in libraries, it’s easy to perform difficult calculations with simple one-line code. It is very flexible and easy to understand that is why every programmer prefers to code in it. Supporting several platforms provide us the facility to code freely on which machine with low specifications even. Aid for Artificial intelligence (AI) and Large Scale Machine Learning (ML) enables the industry to use python for bigger and reliable solutions. Its new invariant that is python 3.5 and 3.7 is more stable and less error-prone.

The following are some detailed features that python delivers to its users.

With many features in the term of usage and calculation computability, python is very easy to understand and is very flexible. It doesn’t restrain user to perform single task programs; multi-threading enables multiple programs to run on different cores autonomously. The main popularity of it is machine learning and its efficient computational capacity and its use in AI and ML.

Libraries for ML and AI:

Python attains a large set of libraries for all kinds of Machine Learning and AI-related tasks. It was hard to visualize data in other languages as compared to python, here you found a lot of libraries that assist in data management and visualization. These libraries save a lot of time for the programmers and also help them to work quickly. Libraries like sci-kit-learn can make ML generally easy, with its ready to use models and function anyone can test and run algorithms on the go. These libraries save the implementation time of the project and allow you to just stick on to your project.

Help on the Web:

One of the main reasons for its popularity is that it is open-source, all of its libraries are available free on the internet and can be download and used by anyone. There are a large number of developers who are ready to help and contribute to the language as it is an open-source language.

Coding in Python is very easy as its syntax is very simple and easy to use. It has some additional functions to do some tasks for which we had to implement user-defined functions. As syntax is simple it means faster development than other languages.

Python is suitable for every type of development. It supports both Object-Oriented Programming and scripting. You can link python data structures with each other and also it’s perfect for the back end development of any type. You can debug the major part of your code in the IDE which helps programmers in debugging and most problems during the writing of the code.

Machine learning involves some complex computational algorithms and sometimes it is very difficult to implement them. Python helps a lot in that regard as it has less code with more meaning or level of abstraction is well maintained. Python provides a very strong and strong testing Environment for the developers. You can implement some complex algorithms in one-fifth of code compare to any other language. That is why Python has become the first choice of the programmers and the business industry.

Reliability is the main feature of python as it works the same in major Operating systems and its code has no difference depending on the machine and platform on which it is running. It is a general-purpose language that can be used for multiple purposes like Machine learning, Web Development, Desktop Application, and Mobile Development as well.

There are many major organizations that are using python for their core programming and they are very successful. There are a lot of reasons for companies for moving to python but I think the main reason is programmers are moving towards that language.

There are some majors qualities in python due to which these organizations are working on it and they see a bright future for their business in it. The reasons why companies are using it are numerous but there are some below.

Its code is very easy to understand sometimes it looks like we are reading the English language. It makes coding very easy that is why main developers are moving towards that language so companies also start working on that language.

Python is a very versatile language when it comes to handling very large tasks. It is due to the programming paradigm of the language. It supports multiple paradigms such as functional, procedural and Object Oriented at its core. Python is an interpreting language so it makes very easy for programmers to script and code the functions at large scale smoothly, rather than trying to build a large solution on another language. In python, the size of the problem doesn’t increase as much time as it does in another language. The solution can be built with any scale in mind you just have to find the solution python with the support you in this regard due to is large data handling techniques.

Python was in the top ten languages for the last ten years and now it is on the top of the list. The main reason for this is its simplicity, reliability, and  scalability. Due to the simple solutions and less code, the industry is moving towards it. It is often said that future is of AI, python is providing the best Machine learning libraries to implement a complex algorithm that is why it is on Google and Microsoft decides to live there 10 years to AI and that means to python. The second reason for its popularity is its powerful back end web framework Django. It also perfect for Natural language Processing and Data analytics.

You may also know: Analysis of Weak Artificial Intelligence

Approach towards Self-Driving in Artificial Intelligence

Role of AI in Epistemology

Concept of Clustering in Artificial Intelligence