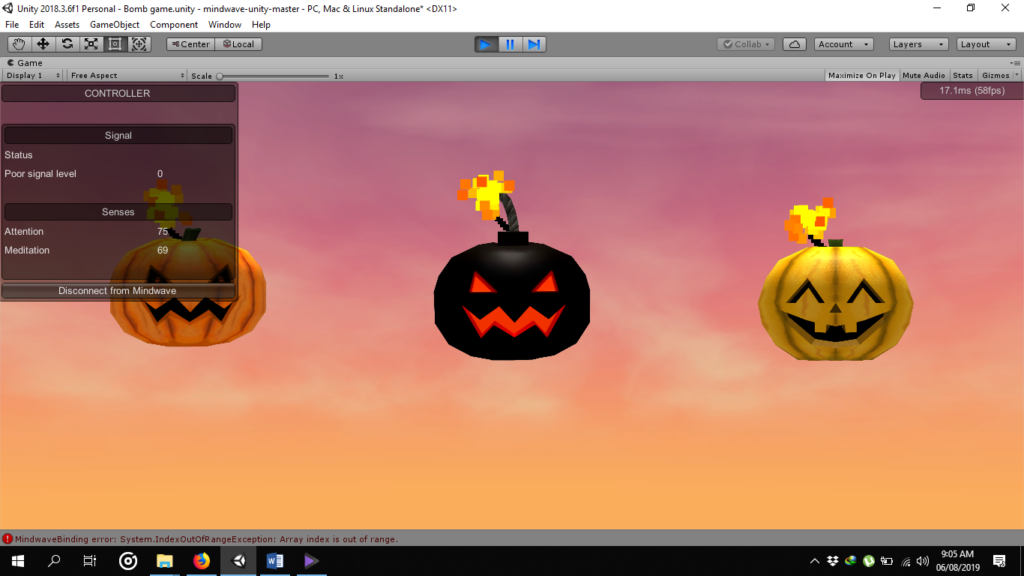 Is there a way to make gaming even more engaging and exciting than it already is now? Yes, and the method to do that is referred to as neurogaming. It is the emerging form of gaming that involves the use of Brain-computer interface. In this method brain waves such as user focus, changing emotional state or attention are captured and can be converted into certain actions that help to play game. Neurogaming has various applications such as in the treatment of multiple brain disorders, educational fields and sports etc. Although many gamer are expert in manipulating the complex sticks and buttons at an almost subconscious level, but it is not possible for all and can pose a hurdle for casual players. The user can play this game without the usage of traditional controllers such as a keyboard and mouse.

Pumpkin Blast is primarily based on the concept of neurogaming. It works on the values of meditation level and attention level. Pumpkin Blast will help the player to improve their attention span and focus. The headset that is used for the working of Pumpkin Blast is called Neurosky Mindwave. Neurosky is a wireless EEG headset, which is used to captures brainwaves activity in real-time. Neurosky has multiple applications in scientific research and in entertainment. By using Neurosky we control our game characters behavior from brain. We are manipulating attention and mediation values on our Pumpkins that ranges from [0-100].

The game consists of 2D pumpkin sprites which are animated in such a way that, more the attention level, the larger the pumpkin gets, and ultimately when it reaches to its maximum it explodes. The wick is designed to show the fire particles when the pumpkin is about to explode. On explosion, a fire explosion sprite is displayed.

The Neurosky headset used to run this game is called Mindwave. The game is created using Unity 3D and is a Mindwave controlled blast game. To start the game, click connect to Mindwave on the upper left corner of the UI. The game works on the following parameters:

The game functioning is directly related to the attention level. After a certain meditation level is reached, the gameplay is directed by the values of attention.

The game has a main window where you can start the game selecting the connecting to Mindwave button. The game doesn’t start unless you connect to your Mindwave device.

Once the Neurosky Mindwave is connected, you can start playing the game. The pumpkin enlarges the more you focus and just before exploding, the wick sets itself on fire.

By playing this game you can evaluate your attention and mediation level in real time. It’s very exciting when you will be able to control a game character with your brain by wearing a simple headset.